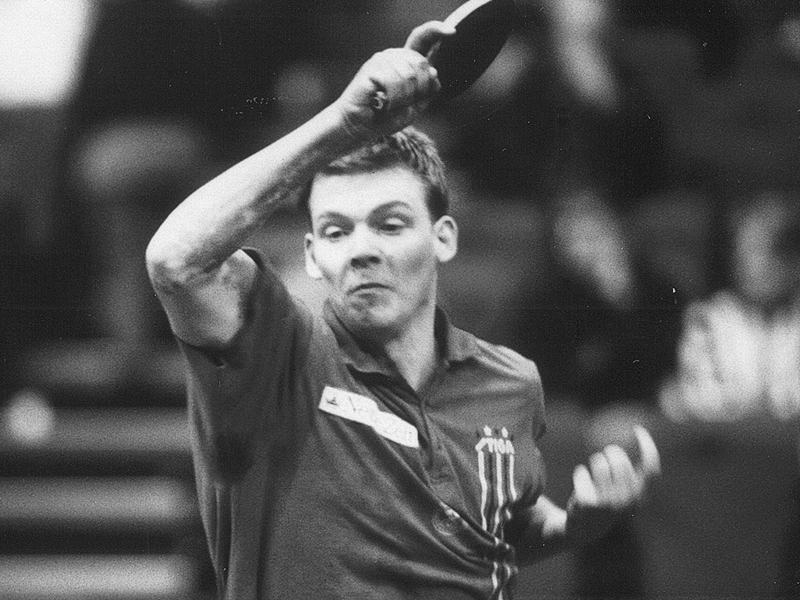 Born on Thursday 29th May in Stenstorp, Falköping, a right handed powerful attacking player, Peter Karlsson underlined the fact that you do not have to be a high flying junior player to succeed at senior international level.
In fact at the 1986 European Youth Championships in Louvain-La-Neuve in the junior boys’ team final against France, he had to sit on the bench and watch his colleagues clinch victory.
Three years later in 1989 in Dortmund and in 1991 in Chiba, in the final of the men’s team event, it was also bench duty as he watched Jan-Ove Waldner, Jörgen Persson and Mikael Appelgren win the Swaythling Cup. Gold in the men’s team event in Chiba, later in the tournament there was more gold; he partnered Thomas von Scheele to men’s doubles success.
Two years later in 1993 in Gothenburg, times had changed; he replaced Mikael Appelgren in the line-up for the final, as he did in 2000 in Kuala Lumpur; on both occasions Sweden overcoming China to reserve the top step of the podium. In addition in 1995 in Tianjin and 2005 in Shanghai he reached the quarter-final stage of the men’s singles event.
Furthermore he made six appearances in the Men’s World Cup, his best being fourth place in 1993 in Guangzhou.
Also at the European Championships, starting in 1992 in Stuttgart, he was a member of Sweden’s gold medal winning team on four occasions as well as in 1994 in Birmingham being a silver medallist. However, the most notable achievement came in 2000 in Bremen when he won the men’s singles title.
Additionally he was the silver medallist at the Europe Top 12 in 1993 in Copenhagen, 1998 in Halmstad and 2001 in Wels as well as in 1994 being the bronze medallist in Arezzo.
On the ITTF World Tour he won the men’s singles title in 2002 in Italy; commencing in 1996 in Atlanta he competed in three successive Olympic Games.